"As far as inspiration is concerned, I have to admit that many times it's the leather itself that suggests the bag's shape."

"My name is Eduardo Alcalá Valencia, and I began to work with tooled leather in the state of Michoacán, where I am from. I made saddles, linings, pants, etc. Then I made shoes and dressage.

"One day I received a telegram with some money in it, inviting me to go to the state of Jalisco to work, and I accepted. After a week, the workshop owner approached me and asked if I knew how to make belts, to which I replied yes. He told me to leave what I was doing and took me to another part of the workshop, where I made belts. Soon I was promoted to master, given my own working table, and I coordinated a team. I was given the freedom to create my own designs.

"One day my wife asked me to make her a coin purse, and when the people at the workshop saw what I had done, they liked it and asked if could do it in a larger size. That's how I began making bags. Sometimes they would bring me some samples to replicate, but most of the time I worked on my own designs.

"As time passed by I became workshop manager, and I developed a good working and personal relationship with the owner, Max. We even became compadres. After a while things changed and problems arose, so I decided to set up my own workshop, where I specialize in belts and bags.

"As far as inspiration is concerned, I have to admit that many times it's the leather itself that suggests the bag's shape. Designs depend on the quality of the leather, on the shapes or objects I see around, on current trends… and they even depend on the mood I'm in!

"Amongst the challenges I have had to face, I am proud to say that I have been able to support my family. Even though this is a beautiful profession and the results are equally beautiful, it is also a difficult profession because sometimes people would rather buy from intermediaries than directly from the person who made the item. This unfortunately affects the artisan, because we earn a lot less than we should.

"My designs are filled with Mexican sentiment, because in Mexico we do not only revere death (Day of the Dead celebrations), we also revere life. This is reflected in the work of artisans who infuse their products with life.

"I would like to see my type of work preserved, and I also want to show it to the whole wide world. It would give a great sense of satisfaction to know that my work is recognized and admired throughout the world. It would even be better if my work was recognized in my Mexico.

"I would like to assure customers that my products are entirely crafted by hand, with quality materials, which makes each piece a work of art. Since I make each piece by hand from leather, there can be slight imperfections, which should not be regarded as defects, but rather as a testimony to the authenticity of the material and the handcrafted process."
SORT BY 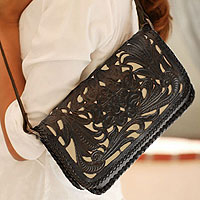