"Though carving has long been regarded as the preserve of men, I am glad that I have been able not only to infiltrate but to also make an impact on the trade."

“I joined NOVICA about 11 years ago. Prior to joining NOVICA, I was selling along the roadside, but now I am in my own shop. One thing I love about NOVICA is that besides selling your works, they also help artisans to grow their business. One of the changes I have observed these past years is that the quality of my production has improved, through strict control from the local team. I have also increased in scale with the number of products I have. To a large extent, my sales have increased.

“Growing up, I always dreamed of owning my own house; and thanks to the funds I earn my dream of building has become a reality. My children have all been seen through school thanks to my sales with NOVICA.”

Artist and musical instrument maker Ernestina Oppong Assante has been featured in periodicals ranging from Red Herring Magazine to The Christian Science Monitor.

"I was born in the eastern region of Ghana on July 23, 1968, and had my early education there. I trained in dressmaking, but on completion of the course, I realized that the trade would not do well in my town. I therefore decided to learn a popular trade like carving. I trained under Kwame Duah, and within three years I had perfected the skill and was developing woodcarvings on my own. Since 1995, I have been operating a workshop of my own with four people working under me. Fortunately, my husband David Assante also trained as a carver, and so we combine our skills to design and carve the drums with perfection.

"From Nakese in the eastern region I acquire a type of hardwood known as tweneboa for carving the drums. For the pegs I use the odum tree. Other materials I use are animal skin, pieces of cloth, iron rods and strings. The wood is already carved into hollows before I buy it. I then carve in the Adinkra and other symbols and designs. The next stage is to have the apprentices smoothe the woodwork with sandpaper. The iron rings which are placed on the mouth of the drum are wrapped with pieces of cloth to prevent rusting. The animal skin is bought from the northern region of Ghana and its environs. It is soaked in water for about two hours to soften. The skin is firmly pulled through the iron rings to cover the mouth of the drum and this ensures that it comes out with a good sound. The drum is then left in the sun to dry after which it is tested for sound and tone quality.

"I love making drums. I believe that there are very bright business prospects for the African traditional drum. Though carving has long been regarded as the preserve of men, I am glad that I have been able not only to infiltrate but to also make an impact on the trade. For the years that I have been in this business, I have never had any regrets whatsoever. It is my fervent hope to carve more interesting drums for you to enjoy."
SORT BY 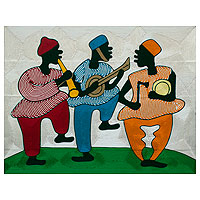 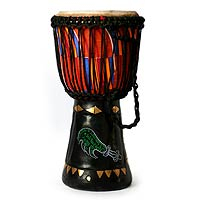 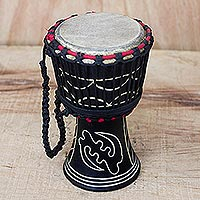 Fear None but GodHandmade Wood Drum £73.99 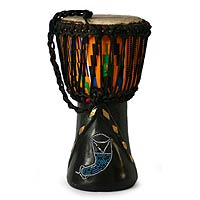 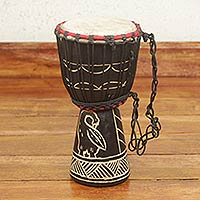 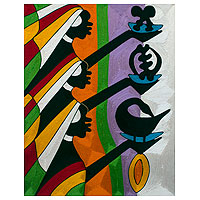 The Wisdom of AfricaFair Trade Cotton Threadwork Wall Panel with Women Bearing A £151.99 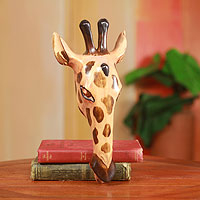 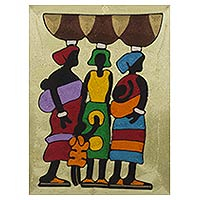 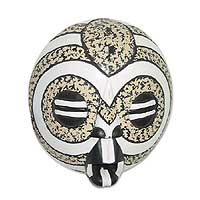